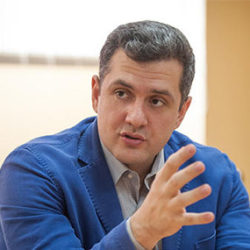 Retired brigade general, ex-head of the United Headquarters of the Armed Forces of Georgia (2012).

Participated in peacekeeping missions in Iraq and Afghanistan. Participant in the Russian-Georgian War 2008 (commander of the 4th Infantry Brigade). ATO participant.

Being the Commander of the Land Forces, and later – the Joint Staff of the Armed Forces of Georgia, took part in the army reformation, the creation of a military industry, the formation of a new one system of education of the armed forces of Georgia and, in general, the modernization of the Georgian army after the war.