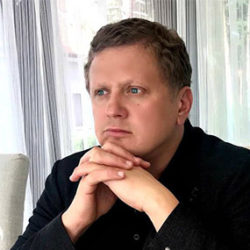 Mr. Chekalsky is the founder of “Charter of the Future”– a public administration-focused organization which united socially-conscious political activists, opinion leaders and entrepreneurs to support positive changes in the Ukrainian society.

The “Charter of the Future” is a public platform for interaction between initiatives aimed at researching the future and relaunching the country. After Second Ukrainian Revolution in 2014, Mr. Chekalsky launched Concordia Comminication Forum to unite subject matter experts and organizations to support innovation and development in the Ukraine. It has become first and unique think-tank in the Ukraine, which develops strategic policy advice for the country. Today Concordia – a space of consent – is a dynamic structure, based on the principles of voluntary organization and self-organization of representatives of civil society, expert community, business instiutions in the direction of dealing with the Future.

Mr. Chekalsky’s social responsibility initiatives are diverse, ranging from improvement and support of orphanages to development of international military training centers “Patriot” in cooperation with the US Embassy and NATO offices in Kiev. After completing his BA in Law and Economics at the Zaporozh’e State University, followed by International Law LLM at the University of Sussex, in the UK, Mr. Chekalsky began his professional career in 1997 as a legal counsel for Ukrainian National Business Counsel (USPP) working as an M&A contract attorney. As an entrepreneur, Mr. Chekalsky began his career by founding the Khlibodar Holding Agro Group in 1999. The company began by managing Bread and Bakery production facilities, improving operations, logistics and introducing new Western technologies into the agricultural sector. Today, Khlibodar Holding owns and operates 25 companies, including grain mills and storage facilities, logistics centers and over 500 transportation units. The company employs 3,000 people and supplies the market of bread and bakery goods to 5 largest cities in the Ukraine. The company’s products are consumed by 2 million people daily and distribution network includes 4,000 locations.